Hey hey! Hope everyone’s had a lovely summer, and you’ve all had some well deserved rest. I’ve had a busy time of it myself, but I’ve also been able to do some fun things as well, one of them being popping up to Edinburgh for the Fringe Festival. Now I’ve always loved the Fringe, I was lucky enough to go about 6 or 7 years ago previously, and I had the best time. It’s a brilliant time for anyone who loves any kind of theatre, with things from Comedy to Physical Theatre to Musicals, and so much more it’s unreal. Although, even if you don’t love theatre per se you would still find something to watch that you’d enjoy, plus Edinburgh is a beautiful city, with so much to do and so much to see there really is something for everyone no matter what age.

What’s It All About? 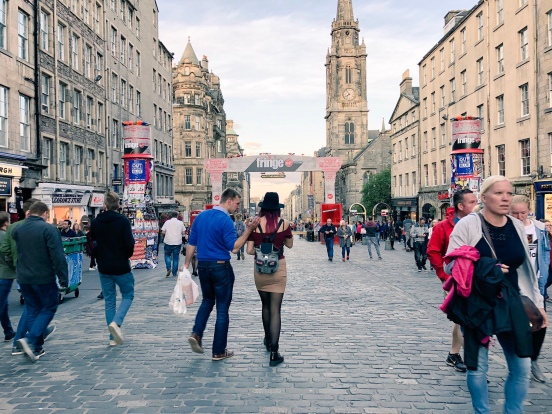 For anyone that’s not sure what the Fringe Festival is I’ll give you a little explanation. The Edinburgh Fringe is a yearly festival celebrating all kinds of artistic creations, it transforms the entirety of Edinburgh into venues to house different shows that rotate on roughly hourly schedules all through the month of August, so there are thousands upon thousands of shows. There are street acts which perform throughout the day to the crowds, as well as various stalls that pop up all over the city selling their wares. Anyone can take their show to the Fringe, and there’s a massive diversity in the performers there, you find people just starting out, as well as seasoned professionals. Many people come with new shows, which do a stint to see how they get on before going onto London, just like ‘The Play That Goes Wrong’ and ‘Jerry Springer The Opera’ (some are obviously quite out there). You also get quite a few big name comedians who have shows there, usually with their new material. There is so much alternative material at The Fringe, things that are put on at restaurants, cafe’s and pubs, and they use the setting they’re given in their show. It’s quite an extraordinary place to be, and you can stumble upon some hidden gems, but also some of the most awful things you may have ever seen. Tickets are also very reasonable, usually being around £13, and some places where you can just walk into shows being just £5 a ticket, you might even find a couple of the comedy festivals which are free as well. It is a complete celebration of all the Arts has to offer.

Although we only had a short time at The Fringe this year we definitely made the most of it, we managed to squeeze in four shows, as well as a little bit of sight seeing and obviously shopping.

With the sheer amount of shows The Fringe holds it’s a near impossible task to know what to pick. We had a little look online before we went up, just to see if anything caught our eye, but honestly, even after refining our search we still had a whopping 5,000 productions to look through. We really couldn’t see the wood from the trees, so we left it to chance and decided we would see what we fancied once we got there. Just before I did have a little look online at Lyn Gardeners suggestions, just to see if any of these piqued our fancy. It was really the best way to highlight some of the best shows at The Fringe, and at least whittle down our choices. We plumped for two that centred around magic, a parody musical and a drunken Shakespearean play.

The two shows we saw with the magical theme were actually linked. Both written and performed by SEDA, aka Simon Evans  and David Aula. The first show we actually saw on our Edinburgh visit was their The Vanishing Man. This production centres around magician Hugo Cedars Vanishing Man trick. We weren’t really sure what to expect, we thought it would be a typical magic show, culminating in the actual trick. Well, it wasn’t what we thought, instead we were greeted with an incredibly slick show, which followed the story of the two magicians talking to us, as they tried to work the trick out. I don’t want to say much more about this, as if you ever get chance to see it you must, and I really wouldn’t want to ruin it for you. The show was fantastic, poignant and hard hitting, with of course some fun magic tricks along the way. The ending is not what you expect, and the whole production leaves you needing answers, as well as more from these fantastic performers. Originally this was the only show we were going to see from SEDA, but after The Vanishing Man we had to go back the next day to see the next instalment The Extinction Event, which followed the same premise and pattern of the previous, but had a much more Derren Brown twist to it, rather than just magic. This was just as punchy, and gave us a couple of answers that the last one had left us with. Seriously though, if you can get to see these guys you have to, they are incredible.

The other two shows were very different. Our first evening event was Hamilton (Lewis), which was obviously a parody of Hamilton, but using Lewis Hamilton instead of Alexander Hamilton. It was a fun show, but that was all it really was, it was a chuckle, but it’s nothing I would rush out to see again, or say was spectacular. Our last show was Shitfaced Shakespeare, which I’ve wanted to see for ages. Once again it was more of a bit of fun than any kind of serious drama. I’m assuming you can guess the idea of the show from the title, but just incase I’ll give you a little explanation. Shakespearean trained actors attempt to put on one of Shakespeare’s plays while one of the cast members is completely bladdered. You can imagine many things change, and all of the actors must keep on their toes to keep up with wherever the story may be going with their inebriated colleague. If you can catch any of these shows around you really should, it’s great fun, and you’ve never seen Shakespeare in such a way. We managed to watch a version of Hamlet where instead of a fight at the end there was a dance off. My sides were hurting afterwards, and this will always be top of my Fringe must see list.

The Sights and Shops

Edinburgh is full of absolutely beautiful views, the sight of the castle on the side of a mountain is incredible, and something that made me smile every day I walked by it. Unfortunately we didn’t have to have a look around the castle, which was a shame. I loved looking down the long roads at all the beautiful buildings, as well as all the steep slopes, coming from The Fens I’m not used to these at all. They also have a Museum of Childhood, which was really cute to look around, and has lots of old toys from all era’s. Also in August time Edinburgh has a Book Festival as well, which is something I was so happy about. I love books and enjoyed spending time in the book tents searching for any books that took my fancy, so if you’re a book lover make sure to catch that as well, definitely not one to miss.

There are so many shops in Edinburgh, and I spent plenty of time in the usual ones like Hollister, Primark, The Body Shop, to name a few, but there were a few you wouldn’t just find in any city. We spent a little bit of time looking around in Harvey Nichols, as I do not have anywhere near enough money to purchase much from there, but it’s a gorgeous store, and it’s fun to pretend lol. There was the Edinburgh Gin shop I spent a while in as I was trying to find the perfect anniversary present for my parents. If you like gin this shop alone would be worth the trip up there, they have so many rare and interesting gins you could spend a whole day sampling and discussing them, you’d also be able to pick up something very special for yourself. If you’re a Whiskey fan there are lots of little Whiskey shops in Old Town which are well worth a visit, and have loads of rare Whiskeys in them.

Being a fangirl as I am I was very excited to find a Forbidden Planet International, where I managed to pick up a couple of comic volumes I’ve been struggling to find, as well as a Spider-Man Collector Corps, which I’ve been trying to get my hands on for aaaaages now. There was also another fantastically geeky shop called Galaxy, which dealt more with merch than comics. There was so much stuff I’d never seen before, and I had to help myself to an Iron Man and Captain America egg cup set, although I could quite honestly have walked out with half of the store. They had all kinds fo fandoms from Marvel, Video Games, Game of Thrones, Star Wars, Rick and Morty, DC and an absolutely massive Harry Potter section which took up half the store. These two shops will always be on my list of must visits in Edinburgh. Also for the Anime fans among you ( I’m slowly growing into one) there was a wonderful Anime store as well, filled with loads of merchandise and Manga, I had to hold myself back from buying about twenty Pokemon plushies. I was also super lucky to find the bistro that was used as a kebab shop in Avengers: Infinity War.

I had the best time in Edinburgh and is definitely something I want to make a yearly trip around Fringe time. The whole city is just alive, and everyone is in the best mood. It’s a fantastic experience for anyone of any age, and I urge all of you to go at least once in your life. I thoroughly loved my leap #IntoTheUnknown this year, and I can’t wait to go back next year.

Have you ever been to The Fringe Festival? Is it something you’d enjoy? Let me know in the comments below!